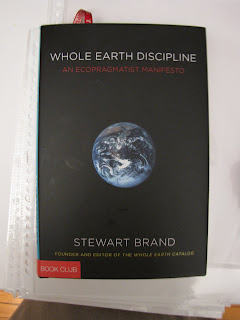 I made the mistake last night, after finishing the book, "City of Light" (which was riveting...) and wanting to read just a wee bit more, of picking up a TED book (I'm attending the conference in Feb. and you get books all year in connection to this) "Whole Earth Discipline" by Stewart Brand. I didn't read all that much of it, maybe thirty pages. But I was up in the night filled with fear for the future of mankind, the future of all those I care about who will presumably outlive me, and then of course myself.

This is not new for me. I've read all the books, I am a devotee of James Lovelock for chrissake. But still, all the information being hurled at me once again, it freezes me up. I think people who are think they are doing something by buying and driving Priuses (for example) are in denial about the true state of our human climate impact that is well underway. I have to say, from everything I've read, trying to do something about the climate by reducing oil and gas consumption, for example, is well... too little, too late. I really don't want to make myself feel better by doing things that only do that, make me feel better but make no overall impact.

The thing that really got to me was his chapter on war and how war is endemic to humankind, an integral part of our species behavior, and there have only been small pockets of time - including this one! - where humans are relatively peaceful. He argues that in the ancestral environment approximately 25% of young men were killed in battle. This comapares with roughly 3% now. I remember Steven Pinker pointing this out at a lecture I heard him give - that our world - on balance - is significantly less violent (in terms of death by combat) than it ever has been. The idea of the noble savage is outdated and wrong. We are living now in a world with relative freedom from violent death - percentage wise. In any case, Stewart Brand makes the argument that as resources are reduced due to climate change there will be more and more wars. He argues that all of civilization could be lost. In fact, is perhaps likely too.

Oh god! So... I'm up in the night with these thoughts. Is it better to die from violence, drought or disease? I have to say, disease wins hands down in my book. It's horrible to contemplate that a large scale population reduction due to disease may be the best chance for civilization. I shudder to think.

Brand also talks about how climate change can happen quickly - all the models we now have are for this slow gradual climate change, when in fact, several times the climate has changed dramatically in three years to ten years.

Anyway, as I said, I haven't read the whole thing... Can't wait till he gets to the uplifting part!

Thinking of the current relative state of peace as a "pocket of time" is, it seems to me, a mistake. Unless there are other reasons we might revert to an earlier state of combativeness, then all we have to do is make sure we don't run out of resources, ever -- which is the very core of the (liberal) "sustainability" movement.

Also, I need to find the link for this, but my understanding is that the birth rate is currently decelerating, and the world population is expected to plateau sometime around 2050, then go down a little. If we can survive until then, it seems to me we then have the opportunity to reduce it still further (by natural attrition!) until we get to a level we like.

Certainly that won't be easy, but there are many untapped tools which could help us get there. For example, an encouraging thing I read the other day: organically-raised food has about 80% of the yield of conventionally grown food. Okay, so that makes organic sound like a waste of land in an increasingly-crowded world -- but when you look at the zillions of dollars of research and equipment that go into conventional food and remember that most organic food is "done on a shoestring", it seems clear that organic could easily surpass the overall yield of conventional. And that's not even getting into the economic gains of having more stuff grown locally so it doesn't travel as far (fresher, less fuel...).

That's just an example essentially at random. The point is that we do have tools for solving the problem; what is desperately needed is for civilization to become more sane -- for the processes by which we make important decisions (laws, wars...) to be more based on rationality than on political expedience.

There are people working on that, too. The creation of the blogosphere is helping a great deal, but there needs to be better organization.

Well, I continued to read the book tonight and in terms of population, it seems to be naturally leveling off just like Woozle here says. Much of this, apparently is part of the move to cities, the urbanization of people. In cities, children are luxuries compared with the country. I had never made that particular connection before. Anyway, I agree Woozle, it's true too, we need to be more sane! We need an outbreak of sanity!

As a take-my-own-bags to the grocery store, recycling, CFC-using, green-thinking, Prius driver, I like to think that if each one of us does everything we can, it isn't too late. And certainly the warnings in books like that are meant to make us extremists, not defeatists, yes?

Will you and Jill be performing at TED? I am very jealous.

I really want to read that book. Thanks for the recommendation, Julia.

A friend of mine used to lecture me on the looming de-industrialization of society. Like our time is a brief, luxurious fluke that will burn out eventually.

I need to educate myself a bit. The vegans say meat eating is wasteful. The primal eaters say mono-cropping is destroying the soil. Makes me feel guilty to eat anything. And don't even get my buddy started on the depletion of water sources from indoor plumbing. ( *shrug* I'd get arrested if I used the grass outside like my doggies do :)

Maybe local poly farming, plus the reestablishing of grass fed herds will become the norm. Sure would be healthier for people and the earth! Out houses? eeeww.

Yeah, I'm thinkin' we're too far 'round the bend to make any significant difference at this point, so I just hang on to the ol' v-6 Ford Explorer. I really don't go anywhere tho so only have to fill it up like once a month. I was watching the British 1960 version of "HG Wells Time Machine" recently. The movie starts in 1900. EVERY TIME he would stop the time machine; in the teens, the fortys, the fifties, people were at war. He'd be so amazed by whatever new technology there was at that time and run up to people like, "Good GOD man! Can you BELIEVE how LUCKY we are to have come so FAR!?" And everyone would respond the same; "What? Whatever! You're nuts! I'm busy doing something IMPORTANT! Fighting in a war!" Finally, thousands of years later he ends up in what appears to be Nirvana. Hardly any people left, but everyone there is blond and blue-eyed (like Children of the Corn). Sitting alongside a river idly chatting and laughing. A girl who evidently can't swim goes drifting by, screaming "help me!" and maybe a few turn to see what's causing the noise, but NO ONE thinks to get up and help her. The star of the movie yells, "Isn't any one of you going to get up and help her?" and they were like, "Um. Why?" That complete apathy that I see in so many 'fellow citizens' today scares me more than worrying about the future. (shudder). So...yeah! You may want to add that movie to your 'uplifting' list. :-)

If you haven't already, you'll be hitting Stewart's controversial views on nuclear power. He was also nice enough to endorse my novel on nuclear that provides an insider's perspective of the good and the bad. "Rad Decision" is available free online at RadDecision.blogspot.com and is also in paperback online. Coverage of this issue has been limited to pundits, academics, advocates and journalists - which is a bit like reporting on a war without talking to the soldiers. My book is meant to rectify that while being an entertaining read. (See the homepage reviews.) It has zero corporate sponsorship and I get zero royalties.

On the War thing - I see a lot of parallels between the past, when this little chief or king attacked someone nearby, and the present - when this little CEO isn't content running a nice business and starts taking big risks to make things more interesting. Just boys being boys, for the most part. Another reason the glass ceiling sucks.

I found a great deal of helpful information above!