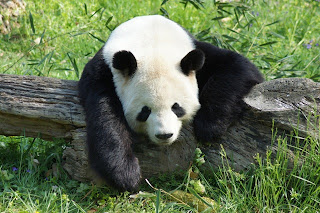 This photo taken by Michael on Thursday, March 29, 2012.  We were at the National Zoo in Washington D.C.

Is this panda thinking, "I only have 5.4 tons of bamboo left to eat in my lifetime."?

Because that is what I've been thinking about lately.   So little time, so much bamboo to eat, and yet it doesn't feel like it's enough bamboo.  Or something like that more analogous to my own personal bamboo-like necessities.

I've run this metaphor into the ground.

Last week was Mulan's Spring break at school.  We (Michael, Mulan and I) went to D.C.  The weather was sublime, the cherry blossoms were blossoming, and I could happily live there.  We spent a day at Gettysburg too.  It was excruciating, because Gettysburg really needs two days - at least.  We spent a long time in the museum.  Then, we only began the driving tour, did about 1.5 hours of it.  I  guess I imagined Gettysburg as a small area, but it's very large, so many things went on, so many different factions of troops. I thought of Gettysburg as more of a meadow.  Anyway, I have to go back.  We listened to a CD of civil war songs while we drove around.  I didn't realize how many of them were re-worded Irish songs.  I loved them all.

We went to the Capitol Building, and took the tour in the new underground Welcome Center.  We spent a very short amount of time at the Library of Congress.  We went to the National Portrait Gallery, to the Postal Museum (very informative!) and to Textile Museum (Mulan insisted - she's very interested in looms.)  We hung out outside the Supreme Court while the health care law was being challenged.  There were many more supporters of the Affordable Health Care Act than detractors, but the media honed in on the crazy tea partiers (they were dressed up, and more interesting to look at.)

We went to the Jefferson Memorial and the Lincoln Memorial at night - all lit up, full of people (but not too many) and it was very romantic.  We spent time at the National Cathedral.  We took pictures of the Washington monument shining at night.  We didn't have time to do soooo much.  PAINFUL!  No Newseum, No Ford's Theater, No Corcoran Museum, and on and on.

Let's change the subject, shall we?  (btw, my spell check on blogger isn't working, so please excuse any misspellings in advance...)


I read one book this month.

1.) Middlesex by Jeffrey Eugenides.  I fell into this book like it was an ocean and I floated along on the waves until it was over.  A complete delight.  Eugenides writes in a very particular detached and yet intimate style.

I read two books on my new Kindle, while on my road trip.  One book I'd read before, but I wanted to read it again.  The other was one of my self-help impulse purchases.

1.) Bossypants, by Tina Fey.  Fantastic, hilarious, smart, funny.  Again.
2.) 18 Minutes: Find Your Focus, Master Distraction, and Get The Right Things Done written by Peter Bregman.  I found this to be a very useful book.  Bregman is a blogger for the Harvard Business Review and he has hundreds of thousands of followers.    Peter Bregman — Organization Change, Leadership, Communication and Productivity  One of his basic premises is that you can't get everything you want to do done and most books on this topic are about organizing yourself so you can be more efficient and do more.  But he suggests, (and this is definitely what I've come to as well) that you should acutally do less.  Much of the book is about explaining how little time you actually have, and how unpleasant working hard and really efficiently is, in day-to-day practice.  It's not particularly enjoyable.

He says we should only have three to five areas of focus, and really three is better than five.  My three: 1.) mother and house manager and wife and friend (to a very few people.)  2.) writer of books and screenplays 3.) exercise enthusiast.  That's it.  Everything else should fit into 5% of my effort.

But the point is, "18 Minutes" got me off and running on a deeply existential theme - I really can't do everything I want to, and I just have to accept it, because railing against it is time and energy consuming and doesn't change anything.

On average I read between 500 and 1000 pages of something a month.  But sometimes it's much less.  250 pages of something.  Also, I'm not including my magazine reading, which I really, really enjoy. (For example, I cannot wait to sit down tonight with my new issue of Skeptic Magazine, the cover of which promises to be about Scientology.)  But if I say I read two books a month, on average, and I live to be 90 years old, (I know this is optimistic, but let's just say...) this means I can read about another 1000 books in my lifetime.

This startling realization rocked my world.

I want to read so many more books than that.

But only 1000 books. This is a tragedy.  I can imagine 1000 books.  I was overwhelmed with sadness when I realized that I could only expect to read another 1000 books.  Now, I could increase the time I spend reading.  Right now I'd say it averages an hour a day.  And this does not include magazine and internet reading.  It's really hard for me to get in an hour a day reading.  I really have to remember to do it.  Frankly. I do not think I can increase this amount.  Yes, a day here and there - vacations, weekends - I can do more, but honestly, I think this is a realistic goal.

1000 books.  Let's divide this between non-fiction and fiction.  This means only 500 fiction!  500 non-fiction!  Terrible!  It's so finite.  Jesus, I probably have a thousand books I haven't read in my house right now.  It feels like such a small number.

I have to start reading the classics.  I haven't read Dickens.  I need to read Kingsley Amis' "Lucky Jim" again.  "Lucky Jim" was my father's favorite book, a copy was next to his bedstand his whole life.  I haven't read it since I was in college.  It's a masterpiece.  I have to read it again!  I totally plan to read Dostoyevsky again, and Tolstoy, and Jane Austen.  Just the books I've read and want to read again will take up at least 100 books!  This is a disaster!  What about Evelyn Waugh?  "Scoop" and "Black Mischeif" must be read again.  If I were going to suddenly die in the next year and I realized I'd never read "Scoop" again, it would make my final moments more excrutiating.  Okay, Lucky Jim next. Followed by Scoop.

Oh, except there are other books I want to read.  I have a book about Heddy Lamar and her inventions next to my bed, and it's calling out to me.

I am circling downwards in panic.

Okay.  This is getting silly.

These are the movies I watched in March 2012.

Well, I wrote a bit about "Carlos" last month.  It's really worth watching, and I'm still thinking about that film.

A note on my Nuri Bilge Ceylon month.  He's a startlingly talented Turkish director.  "Once Upon a Time in Anatolia" was my favorite film of last year.   It rocked my world, that movie.  It got so under my skin, and images from this film still seep into my days - every day, in fact.  It won't let up.  That film seriously haunts me.

So, this month, I watched all of Ceylon's previous movies.  Each one was a delightful discovery. ("Anatolia" is his crowning masterpiece, however.)  Of the three I watched this month, I think "Distant" is my favorite.  His films are slow, very arty, but yet - not at all pretentious.  The characters are believable and the situations mundane and life changing.  The cinemtography is exquisite.  I just cannot say enough about this director.  He's my favorite working director right now (well, as long as I don't think about this too much.)   He's the film director I've got on my mind, the most.  I want to write more screenplays, and this director has inspired me and inflamed my desire to write.  He's moved the bar up, and yet somehow makes writing like he does seem within reach.

"Last Train Home" is an impecably made documentary about a family in China.  The parents migrated to the city to find work in factories, and their children are being raised by the grandparents.  It's heartwrenching, but the film is done without pity or sentimentalization.  Documentaries are getting better and better, and this is a good example of one done very, very well.

But aside from the Ceylon films, the film that had the most impact on me last month was... Anvil!

Yes, "Anvil."  I watched it twice.  I love that movie so much, I could watch it again right now.  In fact, there is a moment in "Anvil" that relates to my current ruminations on time.  The film is about a hard rock band that didn't make it back in the 80s when they seemed like they were going to explode. (It seems like it's a mocumentary, much like "Spinal Tap" and many critics wondered if it wasn't all fake, but these guys are real, and for me, this film is much funnier and much more profound than "Spinal Tap" - and I really loved "Spinal Tap"!!)   Anyway, Anvil - the band - had many fans.  The music they play isn't my cup of tea, at all.  But that's not the point.  The point is the dedication these two guys (Robb Reiner and Steve "Lips" Kudlow) have about their band, and all their particular personality issues and family issues and performing issues.

At one point Lips says, "You know there isn't that much time in the arts - 30 years and then it's over."  I'm reciting this from memory and I think he says it more eloquently and desperately and poignantly than I just paraphrased, but it broke my heart. Because that is what I've been thinking about too.  When you are young, you don't know how little time there is.  And when your career is ascending, you don't realize how fragile that is, and how instantaneously it can go away.  The film had me laughing both at and with these two guys, sort of like how I laugh at and with myself!  I was just bowled over by this wonderful little movie.  You've got to see it, if you haven't already.

Ta Ta until next month...