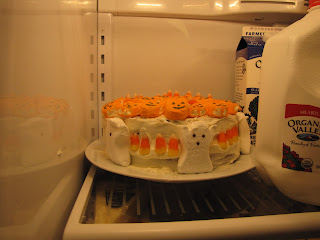 I'm in such a bad mood. I promised to make a cake for the Harvest Festival at Mulan's school tomorrow night. The cakes have to be delivered at 9:00 a.m. They are for the winners of the musical chairs contest. In the abstract, in my midwestern mom, suburban kitsch oblivion, I thought it would be really fun to make a cake. That is, until it was 8:00 p.m. tonight and I was making a cake. A cake that had to cool before decorating it. And decorating it before bedtime was important to Mulan. And by 9:00 p.m. it was very, very, very not important to me. Instead of a happy mother-daughter decorating experience, poor Mulan tried to have fun while I huffed and puffed and grimaced and wanted to blow the house down.

I so often wish I could clock out as a mom. I wish I could say, "Hey, I put in my 14 hours, I'm out! G'night!" So we decorated the cake, me in a poopy mood, and now it's in the refrigerator in hopes that it doesn't turn into a big puddle because it was really still too warm to decorate. I hate Fall Festivals. I hate goofy cakes. I thought I would love all this and I don't. I really don't.

Also, my camera is on the fritz and it will only take one picture without a flash before it closes down and insists on new batteries, even though THAT IS CLEARLY NOT IT'S PROBLEM! So I had one shot, and that's the shot - the poor cake in the fridge.
Posted by Julia Sweeney at 10:03 PM

If this posting keeps up, i'm going to have to take you out of my "slackers" folder.

Hope the cake holds up, since it's an amazing job! What a great midwest mom.

That is one amazing cake.

You're putting too much pressure on yourself as a mom. I have a "good enough" philosophy. It doesn't have to be perfect, or Martha Stewart, or even as good as my mom would have done something. Good enough is fine.

Buck up, life could be a lot worse. You will have a great time at the and wonder why you were such a grumpus.

Yes, I would love to clock out too. I have a 1 1/2 year old and am pregnant with my second. Sometimes I wish the 24/7 fetus schlep could get me out of parenting the first. Sometimes a poopy mood is the best you can do.

But the cake looks awesome! (Especially to your daughter I'm sure.)

AND... even though you only got one photo... AND it's in the fridge you've got to score some sort of Mom points for having organic milk in the frame, right? Right?

Forgive the unsolicited advice, but are you using the correct batteries in your camera? I had a similar problem with my camera and discovered I needed to use Lithium AA batteries, not regular AA batteries. Works like a charm now.

Atheists are a "Walking undead"