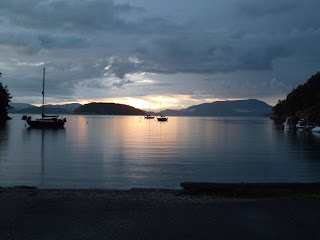 I just turned in my second draft of my book on Tuesday afternoon.  I have put everything off until I could finish it. It's not even that long, and I can't believe it took me six months longer to write it than I thought it would.  I hope the publisher is happy.  It's still supposed to come out in April.  I'm going to New York to meet with my editor next week, and I'm also going to stop by Joe's Pub and do a story during each of Jill Sobule's shows, Tuesday and Wednesday.

I really hated that I have missed two monthly blog entries. One thing that I love about writing my blog is that it forces me to remember what I watched - movie-wise - and what I read - book-wise.

The picture above was taken by Michael on Decatur Island, which is an island in the San Juan Island chain, just off the coast of Seattle.  We went there for a family vacation at the end of July.  I could live there. I loved it so much.

I have a busy month ahead. After going to NYC, I'm going to attend, on Oct 12 - 14, in Portland, the annual Freedom From Religion conference.  In fact, I am going to speak on Saturday night. I love that organization and I'm really excited to be part of it.

So, let's get onto the books.

July was the first month in my life where everything I read was on a Kindle.   And I have to admit, even though I was soooooo reluctant, I liked it.  I like that you can change the font size.  I like the cover with the little light.  I have the cheapest black and white one, and I will never want one with color. I like it just as it is.   But I learned something, there are some books that are good for a Kindle, and some that aren't.

Books not good on Kindle for me:

1.) Difficult books.  This is a large swath of the books I read, and actually, the book I finished as July began, The Glorious Art of Peace, is a good example.  When a book is dense with ideas, ideas that are challenging to me, I need to flip back a page, skim over a page, look at the index, put it down, pick it up, highlight and make notes. These are not easy things for me to do on a Kindle. I need to have a sense of how much more book there is, physically.  Sometimes in frustration or in overwhelm, I need to flip through the chapters in a way that is impossible on a Kindle.

2.) Classics.  There's something about holding "The Brothers Karamazov" or even an Orhan Pamuk book that makes the Kindle seem, well, unseemly.

3.) Kindle popularity makes it impossible to know what people are reading.   For example, if you board a plane, it's nice to see what people are reading. Yes it can be depressing, but it's also interesting.  I do remember being on a cruise once and 80% of the people on the boat were reading "The Purpose Driven Life."  That was really an eye-opener.  But I've started random conversations with people after seeing what book they're reading, standing in line for something, for example.  It's nice. I wouldn't ask someone what they were reading on their Kindle. (i don't go around starting conversations with lots of people just because they're reading a book I am familiar with or curious about, but it does happen from time to time and the Kindle is not making that better!)

I guess I read a spate of comedian's memoirs (why would I do that?) and I have come to realize that my book is not a comedy in the way these are.  And I wish it were!  I loved every one of them. I wanted to befriend Rachel Dratch, Ali Wentworth, Liss Winstead and Michael Ian Black as soon as I put their books down.  I probably laughed the most at Michael Ian Black's book.  But they were all good.  Each one had at least one chapter where I laughed out loud, very hard, and in public.

I read Allegra Huston's book "Love Child" in the three or four days before I went to her house (she's a friend and I went for a night's visit after a few days in another city close by) and I was gobsmacked at how well written and insightful it was. What an amazing thing, to know all this stuff about a friend I have known for some time, but didn't know everything, not at all, and not by a long shot.  Really compelling and her writing style is an inspiration.

Orhan Pamuk is like drinking a special drug.  I fall into his books and have a hard time in the real world afterwards.s

"Wired for Culture" is so fantastic!  Ohmygod, you have to read it immediately.  We humans are all just idea creators and digesters and propagators.  I became a little preoccupied with the author, Mark Pagel and watched every video I could find on the Internet. He has a pretty good TED talk, and other things on You Tube.

Okay, we're about to leave on a camping trip in Door County, so this will be brief.  As far as the movies "Ted" and "Hope Springs" are concerned....  these are the only two movies I saw in a movie theater.  When I left the theater after seeing "Ted" - and Seth McFarlane is a really wonderful guy, and I am an admirer of his, I'm so happy whenever I see him on TV, I just.... I can't even begin to form words for this film. It wasn't that I thought it was bad, it was like going to a fast food restaurant and then being asked to weigh in on it's value as an ocean liner.   "Hope Springs" - well my friend Nancy said it best according to me, "Meryl Streep's character was so disturbing in that film that I was afraid for her."

Of the old movies I saw for the first time, the standouts are "The Princess Comes Across" with a great performance by Fred McMurray.  And "Midnight Mary," a story of a woman with a difficult past, who becomes part of a gang, who tries to get out. Loretta Young stars in a magnificent performance, probably my favorite from her.  "Barbary Coast" - we watched it twice, actually.  Howard Hawks - early Hawks.  Miriam Hopkins stars along with Edward G. Robinson as a swashbuckling gambling establishment owner with an earring!  Fantastic.

The foreign film I saw, "Tuesday, After Christmas" is a Romanian film - a really nuanced study of a bad marriage.  Very inspiring (as I'm working on a script about a marriage falling apart...)

And "Margaret." I was so overwhelmed and amazed at "Margaret" - I can't even begin. I loved it, I was profoundly disturbed by it. After I saw it the first time I was up all night thinking about it, unable to sleep. I can't even get into all I have to say about "Margaret right now." It's not a movie for everyone. Two of the people I watched it with, when I watched it the second time, didn't care for it much.  I think the movie goes out of control like the main character is going out of control, but it's a controlled out-of-control feeling, but it's so successful at doing that, that I think most critics - a lot of critics anyway - felt it was Lonnergan's fault.  But I think it's exactly the frenetic feeling he was going for. He succeeded by being so good he caused many people to think it was the storyteller and not the story.  Anyway I really think it's a masterpiece.