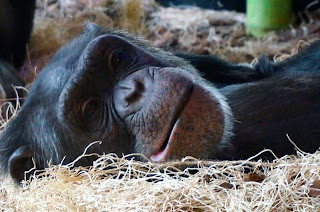 The above picture was taken by Michael at the Lincoln Park Zoo in mid-December.

We saw many more primates later in the month, in Costa Rica, where we went on vacation.  But this picture is my favorite.  Looking at her expression causes me to relax.

What is new?  Well, we just returned from a two week vacation in the Yucatan and Costa Rica.  We went to many ruins in Mexico.  We didn't realize that we'd be there with the crazies - the people who thought the world would end on Dec. 21st.  But we didn't have any run-ins and we mostly avoided those people.  My favorite time in Mexico was in Valladolid, a small colonial town with a great folk art museum, which is actually just a guy's house who opens it up every day for an hour or so for people to look at his amazing collection of Mexican art.  Casa de los Venados │ Oficial Site  It's really worth the trip to see this house, with it's perfectly chosen collection of art.  Some of the art was commissioned just for them, be sure to check out the dining room table with each chair back depicting the image of a famous Mexican historical figure.  I had a fantasy of going to this city for a month and just writing and reading every day while mosing around in the afternoons.

Then we went to Costa Rica, and joined a group.  It was a family-active-travel-vacation kind of thing.  Every day we did some different active thing: surfed, zip-lined, hiked, biked, white water rafted, kayaked.  It wasn't too exhausting, but kept us on the move.  We all had a fabulous time.  Mulan didn't want to come home.

Jill Sobule and I are getting ready to do a little tour in the summer with our Jill & Julia show.  We have a show here in Evanston at Space on January 26th.  I will get the rest of the schedule up soon.

I'm having a website designed, and it will be launched in a couple of months, maybe sooner - we'll see how it goes.

I'm also getting ready to start promoting my book, "If It's Not One Thing, It's Your Mother" which will be published on April 3rd by Simon and Schuster.  I will have a schedule soon for that too. I want to do as many book store readings as possible, I'm so excited to do that.  I know I'll be at the 92nd Street Y in NYC on April 2, and then I'll be doing a week of publicity there.  More on that soon.

Of all these books, the Bin Laden book was the most fun, the most informative, the most engrossing, and maybe even the best written (Although they were all very good.)  I saw Steve Coll on "Up With Chris Hays" - my don't miss political show, and they were talking about his ExxonMobil book.  So before we left on vacation, I got that and the Bin Laden book which he'd written in 2008 and loaded it onto my Kindle, along with the Miss Minimalist book. I was so absorbed with the Bin Laden book, and after each chapter I had to tell Michael and Norma (Michael's mother who was travelling with us) what I'd just read.  God, that book, that story - the story of the Bin Laden family - it really should be a mini-series on HBO or Showtime or something.  Just astonishing.  I had no idea!  So many interesting characters.  I only had the most rudimentary understanding of that family, how they came to power, how friggin' many of them there are!  I didn't know that the family had basically disowned Osama for years before 9/11.  It's a complicated story, and Coll is a magnificent writer - so clear and stark and dispassionate, and letting the facts speak for themselves.  Salem!  Salem is the oldest son, who died years before 9/11 in a plane accident (the father died in a plane accident too - lots of exploding planes in this family's history) and Salem is such a bigger-than-life character, he seems fictional.  He is obstinate, silly, smart, insightful, indulgent, superficial, but a great person-manager. I mean a wonderful connector.  Anyway, I would recommend this book above almost all others for the month.

The ExxonMobile book was enlightening, I mean, I know nothing about the oil business.  It's not a take-down, just once again, Coll dispassionately relating the facts.  I found myself much more sympathetic to ExxonMobile, and more angry at ExxonMobile after reading it.  I really was an idiot when it came to this area of our world.  It was a long, often boring slog however.  I think Coll made it as interesting as possible - and he did a good job. There is actually a lot of intrigue and action - and I'm thankful I have this understanding now, I think reading this book has made me a much more aware and informed person... But I didn't go gaga over this book like I did the Bin Laden one.

Katie Roiphe is a very good writer, and I enjoyed her essays so much.  I love the title.  I also enjoyed "The Neighborhood Project." I read David Sloan Wilson's book "Darwin's Cathedral" and even heard him speak at Cal-Tech in Pasadena several years ago. That's a good book too...

"Miss Minimalist" became this wonderful way for Mulan and I to have several great talks on our trip. Mulan finished her book, "To Kill a Mockingbird" about halfway through our vacation and didn't have another book. So she began nabbing my Kindle and reading Miss Minimalist.  The book is just a 99 cent Kindle single - but it's so much more than a how-to guide. It's really about morality, about a whole world-view, and getting away from the consumerism that can encroach on our lives and shape our expectations, and ultimate enslave us. I love Francine Jay - I am really a fan.  I already read "The Joy of Less" by her - her hardback book.  I have a ways to go to get where I want to be with my "stuff" but she is helping to show me the way towards where I want to go.  What struck me about this Kindle Single was that it went beyond stuff.  It was about keeping our lives simple in general. Not having such complicated "to-do" lists, and accepting the fact that the most valuable thing we have is time, and spending that time mindfully means not being able to "do" as many things as we might want to.  The book was perfect for Mulan to read at age 13.  And it was perfect for me to read as well.  We had a great time discussing this book all through Mexico and Costa Rica.


Oh, what a great movie month. As you can see, I got the box set of Elia Kazan movies, and I'm making my way through them. In fact, the other day I watched On The Waterfront (but that's a January movie...) for the first time.  The box set is quite nice and has a lot of tantalizing extras.  Frankly, I think Kazan's "A Tree Grows in Brooklyn" is his best film so far!  I watched the movie twice, and the then with the commentary.  Even with the commentary going I cried my eyes out when the dad dies.  Of course that movie resonates deeply with me, the alcoholism, the Irish stuff, the daughter who loves a dad who is tragic.  The whole thing just gets me. I hadn't seen it as an adult. It's even better than I thought it was.

The one thing that I have to get over (and over and over again) is that Kazan casts women who don't fit in the part they're playing, sometimes to a hilarious degree!!  Dorothy McGuire did a great job in the part of Katie Nolan in "A Tree" but she does not seem Irish working class in any way whatsoever.  In Pinky, Jeanne Crain is supposed to be playing a mulatto woman and she's hilariously Nordic looking. It's just ridiculous.  Even in "On the Waterfront", Eva Marie Saint's character seems like a WASP Connecticut waif with perfectly straight teeth and a patrician bearing and it's very hard to accept that the nun's boarding school really took every wisp of lower working class mannerisms and vocal tone out of her.  But once I get past that, I enjoy the movies a lot.

Speaking of commentaries, on "Sunrise," there is a lovely commentary by John Bailey, the renowned cinematographer.  Now that I've watched so many movies with commentaries, I realize there is a big range - some of them are just people rambling on and on about almost nothing. Some are really informative and enlightening - John Bailey's commentary on "Sunrise" is FANTASTIC.   Really a don't miss.

I watched "Once Upon a Time in Anatolia" AGAIN.  Oh god I love that movie. I could watch it several more times. Andrew O'Heir at Salon described it as a CSI episode written by Anton Chekov. That is the most perfect description. This movie might have changed my life, I don't know. I love it SO MUCH.  I've seen it four times now...

I saw "My Night At Maude's" in college, but was glad to see it again. It was both better and worse than I remembered it.  "Viva Zapata" is great! Marlon Brando - I'm kind of obsessing about Marlon Brando right now.  God he was so good.  The way he behaves in film - it's like he knew how to mainline heroin - what I mean is, he does not get in his own way. He really seems like he is the person - he just takes your breath away - even when he's playing a Mexican revolutionary!

I have to write a shout out to "Gilles Wife" - a lovely nuanced film. I hate the ending, however. It doesn't belong with the film.  A subtler ending would have made the film absolutely perfect.  But the film is still wonderful - great performances.

Okay, I am getting ready for my friends Jim Emerson, Richard T. Jameson and Kathleen Murphy - who all live in Seattle - to arrive this afternoon so we can commence our annual winter film festival here in my house. For five days we will be watching at least AT LEAST two movies a day.  I can't wait!