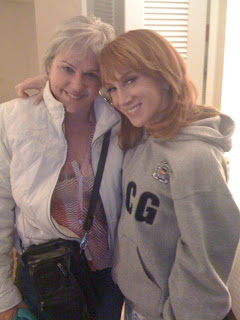 Well, I guess I should have said I'd post a picture MOSTLY every day. Ha. Yesterday got the best of me. I went to an Art Show opening where my friend Annie Morse had an installation entitled "Impregnate." She had a pile of old, black, kind of rotting avocado skins with a wee green shoot making it's way through the dying mess. She'd gotten her verb - impregnate - as an assignment. There were 36 - around that number anyway - installations all based on verbs.

Someone had gotten the word "ask" and had a real Catholic priest who sat in a corner with a blackberry and he would forgive your sins by text for the two hours of the installation. I texted him, "I want to forgive you for even being a priest. But I just... can't. Will you forgive me?" I got his reply a few minutes later, "Sure..."

Then we went to see Kathy Griffin at The Chicago Theater, the last night of a five night run. She is bigger than Leonard Cohen! (That's who I last saw there and he did only two nights.)

Kathy is an old friend from The Groundlings. We were very close while I was on SNL and she came out several times to visit me each year while I was on the show. She always appreciated the celebrities and back stage gossip so much more then I did. And looking back on it, so much happened, so much craziness and tragedy was revealed - why wasn't I more into it? I don't know.

In any case, as you all know she has made a very big career out of her enthusiasms. Her show was really good. She did two hours - and it felt like less than an hour. I could have listened to her for three more hours. It felt weird, like my Kathy, who I used to get to listen to rant about everything all the time - just for me - or us - our friends - and she always was hysterical - and now the world is watching her rant! She has worked so hard and deserves all her success. I told her that she reminded me of Fred Astaire last night on stage, because he always made dancing look so easy. But it's actually really, really hard. That's how she was onstage, like a girlfriend you ran into on a street corner spilling her secrets and making you laugh hard. Seems easy, but it's not.

Afterwards we ate burgers in her hotel and talked until nearly one when I - we were falling apart from exhaustion. It was a great night.
Posted by Julia Sweeney at 4:04 PM

Beautiful! I love the way each of you express yourselves. Her show in Indy was fabulous, the only problem being sometimes the laughter drowned out her next line - a good problem to have!

It's great to see you blogging more frequently. What a treat! (Thank you.)

Okay, so I triple love KG and it made my heart turn backflips to see the two of you together! Did she film any of D-List? That would be SO cool to see you on it!

Dream event: Ha-Ha-paloosa - you & Jill, Kathy G, Rosie, Ellen... yeah, that would be female comedy perfection. A little bit of everything to piss SOMEONE off - you could freak out the religious, Kathy - the famous, Rosie - the right wing fundies, and Ellen (if she gets her edge back) - just about everyone else. Sounds

Julia Sweeney AND Kathy G. all swirled in the same post?? I was already starstruck....

Ok, now I humbly submit my comment of adoration to two of the funniest comedy godessess on the planet!

What a picture! Made my day Julia :) (petra has some great ideas)

I love Kathy Griffin and read her awesome book the week it came out: "Official Book Club Selection." I laughed, I cried. Am I a stereotypical gay for being part of her demographic? I don't care. She's wonderful.

Oh Julia, seeing you and Kathy Griffin together made my day :)

I admire and respect both of you so much....both for not being afraid to be who you are and express things that might make others cry 'blasphemy!'

and equally because you're both incredibly intelligent and funny and 'engaged'

Kathy rules! I was going to leave a post about you being in her book, but I assume you know that.

Love ya both, you fallen Irish Catholics. ;)

Unlike traditional modern-day watches, these classic watches typically are not water resilient. Prevent these people from entering mineral water and humidity to halt oxidation. Heat additionally Cheap Replica Watches Australia plays a large role on the inside routine preservation. Classic watches like this specific require keeping track of room temperature to ensure that they Cheap Replica Watches keep working longer during operate along with in profit. In case it doesn't matter the reason one thing bad comes about, do certainly not worry. There are pros whom conduct restoration plus refurbishment, auto crash comes about, or probably if this watch stops working on account of age. Swiss Replica Watches UK Having these types of watches involving outdated requires lots involving care, if anyone count automatically worth to know, or you wish to maintain your skill replica Rado watches plus history of replica Louis Vuitton Handbags such watches.