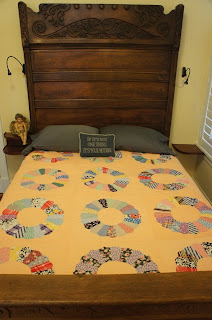 I suppose if my sister, Meg, reads this blog entry, she will have her birthday present revealed before she actually sees it in the flesh...err, I mean... fabric.

From time to time, I've bought vintage quilt tops on Ebay and then had them actually quilted and finished.  I have a special attraction to quilt tops made in the 1930s, and this one pictured above is one of them.  I love the peach color and all the fabrics from that time - some are even feedsack cloth.  I bought this especially for Meg, and sent this off to her.  She lives in Tokushima, Japan.  I sent it on the slow route (I imagine barges and old shipmen loading boats.)  Meg is a quilter herself (and a knitter, and an embroiderer, along with many other craft skills...)

Before I get into the movies I watched in February, I have to mention my odd film watching on Sunday.  I've been giggling here and there over the serendipity of life's random events, even when it comes something as mundane as what back-to-back movies one watches.

I wanted to watch all 5 1/2 hours of "Carlos" - a 2010 French film by Olivier Assayas.   It was made for television, and as a full feature film.  I wanted to see this film because, after the Academy Awards, which were so dull and mostly depressing, I was thinking about how wrong the Academy so often is.  I wondered how long we'd be talking and thinking about the movies that won many of the awards in the coming years.  I was also thinking how the National Society of Film Critics is SO MUCH BETTER at giving accurate awards.  So I was tooling around their website, thinking about how they should have a televised show!  I looked at the past awards and was reminded about "Carlos" - it got Best Feature and Best Director in second place for films of 2010 (Second after "The Social Network.")

I got the film.  I should add that I really loved "Summer Hours" the film Assayas made just before "Carlos."  (And which won best Foreign Film for 2009 by the National Society of Film Critiics.)

So - this is a lot of lead up to explain my weird, weird Sunday.  I finished the film on Sunday afternoon, and was sort of thrown into a reverie by it.  I think it's a masterpiece. "Carlos" is about a terrorist - a left wing, PLO (kind of) associated terrorist - he was born in Venezuela and spoke many languages and masterminded several horrific terror plots, including the kidnapping of the entire OPEC conference in 1975 (I have very vague rememberances of that - I was a high school debater then - the topic, "Should OPEC be Abolished?" :)

"Carlos" is incredible, and I recommend it heartily.  But then, Sunday night, Michael and I decided to watch "Game Change."  The Sarah Palin HBO film.  I had extremely low expectations for this film.  But I was surprised at how even handed and accomplished the film was.  The peformances were so good.  I loved that they took the high road, didn't even get into family or anything other than the basic facts.  I liked that they didn't villify or ridiculous-ize Sarah Palin, they made her seem somewhat saner than I thought she was from watching her live on TV.  But how this cumulatively dealt a much darker and subversive blow - how out of control things were and how no one was really responsible and how frightening the outcome was.  In many ways Sarah Palin is a victim.

There were so many unsettling parralels between Carlos and Sarah Palin!  That's what was so wild.  No - Sarah Palin is not a terrorist and didn't murder people.   But I realized that the emotional impact of both films was exactly the same, which is - here is this charismatic person - with these outspoken ideals - who feels there is deep wrong and claims to want to change the world - who's attractive and dynamic. But who - in the end, is basically an empty shell.  There's no true idealism.  There's definitely a desperate need for attention and a deep drive to feel as if they stand for something, but in the end, they stand for nothing.  There's no there there.

Social pathology is so subtle.  Not in these two cases.  These two cases are not subtle at all.  But there is such a huge gray area in people - when is this type of drive and behavior meaningful and accurate and when is it all smoke and mirrors?  God, I love thinking about this.  And I would not have guessed that it was Carlos the Jackal that made me understand better the essential void in the mind of Sarah Palin.

That was quite a Sunday.


I have watched these movies during the month of February, 2012

"Ordet" is something I've wanted to see for some time. I'm a fan of Dreyer's, "The Passion of Joan of Arc" is a film of his that still thrusts it's images into my concious mind from time to time.  But when I saw "Everlasting Moments" and read that the story line and the style was heavily influenced by "Ordet," and knowing that "Everlasting Moments" would be having it's way with my mind for some time, I decided to put "Ordet" in my Netflix queue.  The film was both difficult and difficult not to watch.   It's style is very stilted and can seem almost awkward.  It's point of view is decidedly religious, even though the plot is about bickering religious people.  But the film gave me shivers.  I really recommend it. I might have to watch it again soon.

I did the particpation accounting for "Bridge on the River Kwai" when I was in my twenties, when I worked at Columbia Pictures in their accounting department.  I have wanted to see it since then!  It's an odd film, odder than I thought it would be. Alec Guiness (so young, so handsome!) is an officer who is willing to die as a prisoner of war over this: that officers should not have to do the physical work that the rank and file soldiers - soldiers who are also prisoners of war - are required to do.  I simply could not let go of this insanity.  I felt the point of view of the filmmaker was that we were to see this stance as an indication of his staunch defense of rules, which was a good thing.  Huh?  Or that he was completely mad.  To me, it was just creepy.  The film goes on from there. It's such a good idea for a story - the main plotline, the bridge and the men building it and then it getting destroyed and everyone having such conflicted attitudes.  It's long and I felt trapped with everyone.  The performances are great.  What a wonderful, but odd movie.

Well, now that the Academy Awards have come and gone, I feel happy that I can delve into movies that were not necessarily released this last year. I felt I had a lot of homework.  And when I watched the awards, which was only fun becasue I was following several people on twitter who I think are funny, many of whom are friends too, and it almost felt like we were all together watching.  It was a sort of sad broadcast, and the only truly funny bit was the Wizard of Oz audience testing bit with Fred Willard and everyone else who is hysterical.  That is absolutely the only time I genuinely laughed. On the other hand, I don't need to laugh.  But I do want to feel the awards mean something, and I have to say I began to feel I was losing that sense.

"Pina" is staying with me too.  I don't know a lot about dance, but Wim Wenders caused me to understand how great dance is through this documentary.  I want to see this film again.

Only two this month, and both by the same astonishing writer.

Reading her books, it makes me want to stop even trying to be a writer.  In Zanesville is a lovely romp with a 14 year old girl.  I surrendered to her fiction so deeply, I couldn't pull myself out and had to get to the library to get her earlier book of essays, which is also heart-stoppingly lyrical and breathtaking.  I love this woman.  I want more books from her.

Okay. That's all folks. Back to my own writing slog....