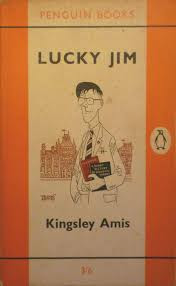 Out of a month of deeply memorable literary and cinematic experiences, two stand out.

(I include TV shows in my cinematic experiences...)

One is that, after thirty years, I reread "Lucky Jim," by Kingsley Amis.  I was predisposed to think I'd overrated it.  (My father's favorite book - read it a long time ago when I was still in the thrall of his opinions about everything)  But I was surprised to find that it was, in fact, even more of a masterpiece than I'd originally thought.  I guess I'm now old enough to really appreciate it even more deeply.  I had to put the book down several times because I was laughing so hard.  (This has only happened to me - well, to this extent - while reading "Catch 22" and "A Confederacy of Dunces.")

But I did another thing.  Another thing that kicked the whole experience up a notch.  I downloaded the audio version of the book from from Audible - read by Paul Shelley - a wonderful English actor.  I read the book while I listened.  I can read much faster than the narrator can narrate.  And while it was excrutiating at first, when I gave in to it - I was forced to slow down, way down - and savour each page - each word.  Because of the excellence of Paul Shelley, many conversations in the book jumped into life in a different way than if I were conjuring it in my own head.  I got much more nuance.  For example, there are several different accents by characters from around the British Isles.  One major character is Scottish.  Jim Dixon, the main character, sometimes slips into a northern English accent - sometimes manipulatively, sometimes accidentally.  I understood this - experienced it, is a better phrase, much more deeply than if I'd just been reading it.

I have to admit that the whole endeavor was one of the most satisfying experiences with a book, ever.

Great experience #2.  I began reading Muriel Sparks' "The Girls of Slender Means" about fifty pages ahead of watching all three episodes (so far) of "Girls" on HBO. I'd heard about "Girls" of course.  I wondered about it.  I figured I probably wouldn't like it.  From what I'd seen about it - looking sideways out of my eyes - grazing across pages of various publications and online, I just thought, "Eh."  Another HBO show about four young women in NYC.  I couldn't be - frankly - less interested.

In the meantime, after I was all up in arms over how little time I have left to live to read everything I wish to read (see last month's blog entry) I had looked over 1000 novels everyone must read: the definitive list | Books | guardian.co.uk.  And I was particularly picking my way through the comedy novels.  I was astonished how few I'd read - about fifteen to twenty out of 150.  My mother-in-law, Norma, was visiting - and she was surprised I hadn't read any Muriel Sparks - being a Catholic and all.  (Culturally! Culturally!)

In any case, I got "The Girls of Slender Means."  I'd just finished "According to Queeney" by Beryl Bainbridge - and while I thought it was mildly funny, it was not even close to the level of writing and humor of "Lucky Jim."  I wondered, "Who is the female Kinglsey Amis?"

After only ten pages of "The Girls of Slender Means" I felt I'd found a new best friend.  Muriel Sparks! WHERE HAVE YOU BEEN ALL MY LIFE?   I was so giddy reading this novel that I had to just put it down from time to time just to compose myself.

Then, yesterday, I coincidentally dug into "Girls" on HBO.

I think it's one of the best things I've seen on HBO.

I can't believe Lena Dunham exists.  I love her, and I love the show.  I love every scene.  I love the characters.  It's so uncomfortable and it makes me uneasy.  Which is GREAT.  It breaks taboos, but is realistic - I believe every character completely.  It strikes me as honest and refreshing and accurate.  From my experience, this is very true and real. And painful, so painful.  And funny, so funny.

To be reading "The Girls" and watching "Girls" at the same time - how serendipitous!  It's so perfect!  These stories do not change.  Women do not change from generation to generation.  And yet, both of them feel very fresh and as if working in untrodden territory, while simultaneously dealing with perennial issues.

Wow, I feel so deeply lucky this month.  I feel I practically stumbled upon gems which became much more magnificent, even magical, with a little adjacent other-art.

That's not very articulate - but you get what I mean.

So, the books I read last month are:

1.) Hedy's Folly, The Life and Breakthrough Inventions of Hedy Lamar, the Most Beautiful Woman In The World.  Written by Richard Rhodes
2.) The Joy of Less, a Miminalist Living Guide.  Written by Francine Jay
3.) Unstuff Your Life: Kick the Clutter Habit.  Written by Andrew J. Mellon
4.) Lucky Jim. Written by Kinglsey Amis
5.) According to Queeney.  Written by Beryl Bainbridge
6.) The Girls of Slender Means. Written by Muriel Sparks

Notes on the above...

"Hedy's Folly" was a nice read.   It's actually about Hedy and her scientific collaborator, composer George Antheil.  It should've had a title that included both of them.  The book alternates chapters - in the beginning - about Hedy's and George's early life, and since I didn't know the book was about both of them, it was severely confusing.  But still - very interesting.

I didn't read every word of "The Joy of Less" or "Unstuff Your Life."  But I'm trying to reduce the amount of stuff I have, and these books were inspiring. I also got "Unstuff Your Life" on audio book and listened to it while I walked the dog.  They both have a lot of good ideas. If I had to recommend one over the other, I think it would be Francine Jay's book - "The Joy of Less," but only by a smidge.  And try to get the books at your library so you don't have the book added to your stuff.  (I actually bought the "Joy of Less", "Unstuff" came from the library...)  Today I'm thinking about one idea that seems useful, which is: have a uniform. What's your basic uniform for clothes?  That eliminated a lot fo extra clothes for me.  And of course, former Catholic Girl that I am, I love a uniform.

I'm currently about half way through "The Girls of Slender Means."  I guess I'll try to get to her other, more well known books soon, like "The Prime of Miss Jean Brody."  Wow - there are few things in life sweeter than finding a new author you love.

So many great movies. I can't comment on all of them, I'd be writing for days.  The Mysteries of Lisbon is a 5 1/2 hour extravaganza from Portugal.  It's as if Gabriel Garcia Marquez made love to Barry Lyndon and they had a child - this film would be it.  Very soap opera-y, very grand, very historical-period-piece-y.  I watched about an hour a day for a week in the early afternoon, after I'd finished my work.  It was like reading War and Peace - long and languid and funny and weird.

I wanted to rewrite Holy Matrimony and The Hard Way immediately for today's audiences.  Both were a surprise.

We went to the movie theater to see Chimpanzee at the first possible showing.  I really enjoyed it, in spite of it's bad reviews.  Yes, Tim Allen's narration is a bit ridiculous, and the music is TERRIBLE.  But maybe more people will see it with those elements. I  dunno - for me, it didn't get in the way and I loved it.  Anyone who thinks we, as a species, are any different than chimps, is crazy.  Yes, we can talk, and yes we can share knowledge and cooperate on grander scales, but basically, we are chimps.  Plus, what is cuter than a baby chimp?  Nothing.

This Gun for Hire was a great film noir, had to watch it twice.  Veronica Lake and Alan Ladd, they were so good!  The Reckless Moment was fantastic.  Joan Bennett and James Mason, god what a great team.  The Exile was funny, and a surprise.  It stars Douglas Fairbanks, Jr. - who also wrote it.  It's about the English king, Charles the 2nd, in exile in Holland, falling in love with a farm girl.  The film slowly drew me in.  I watched it with my mother-in-law, Norma.  Part of the plot involves the Roundheads - a English political group that was opposed to the monarchy - they were very religious and wanted to push for many more conservative restrictions.  Norma said, "The Roundheads... You know, the Rick Santorum supporters - that's our Roundheads."  And that's so true.  So many movements and issues do not change, just the people promoting them.

Head On was really good too - I loved Fatih Akin's The Edge of Heaven, so I wanted to see his earlier work.  There are similar themes, including women who cut their hair and big dramatic moments.  And people murdering each other and then changing quite a bit while in jail.  The film made me want to go back to Istanbul.

Dance with a Stranger - Oh! I can't believe I hadn't seen this film.  Miranda Richardson is luminous, and the story - of a creepy love triangle - is seriously depressing and sad.  And it's true too. Richardson plays the character of the last women executed by hanging in England - Ruth Ellis.  Gorgeous movie.

Jesus Christ Superstar: Mulan and I watched it. I thought maybe it was a good way for her to learn about Jesus.  HA.  She was so bewildered.  I realized that since she hasn't been inculcated with religious behaviors, everything just seems weird to her.  Things I would have never had the naive open-mindedness to even ask.  For example, at one point she asked me,  "Why do those sick people want to touch Jesus?"  I said, "Because they think he's magic and can heal them."  Mulan said, "Why would anyone think that?"  Me: "Because they didn't have very much scientific information."  Mulan: "That's crazy."  Then I had to stop the film and tell her that lots of people in the world still believe things like that.

Later she asked, "Why are all those women putting oil on Jesus' head, and sort of leaning on him like that?"  I said, "Well, one - Mary Magdalene, is like Jesus' girlfriend.  The other women - well, when you're a cult leader, or actually this can be true of any very high status man - women fawn all over you."  "Creepy." Mulan said.  Then she fell asleep and I didn't wake her up.

Frankly the movie, while interesting - and with good music - and - yes, with some creative visual ideas (although oddly awkwardly realized, I felt)  - was, to me,  surprisingly boring.  I could hardly wait until it was over.  I hadn't seen it since I was 13 or so, and figured it would be a fun ride down memory lane.  Also, Jesus - Ted Neeley - is so hilariously blond.  Jesus' followers are all black, white or Asian.  The Jewish Pharisees are all middle eastern, well Jewish looking.  And then, the Romans, (played by Barry Dennen and Josh Mostel) are literallly mincing - really offensively so - exaggeratedly homosexual.