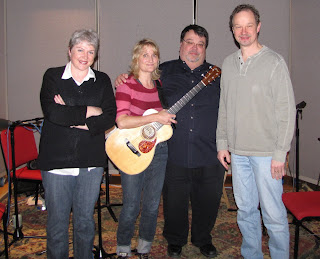 Last Friday, Jill Sobule and I did a "Jill & Julia Show" together at the Lakeshore Theater here in Chicago. We have two more scheduled: April 24 & May 29. We had a fairly packed house and the audience was really responsive and enthusiastic. I am hoping this is just the beginning as Jill and I start to do shows monthly for... for... EVER.

Jills’ fabulous new album, “The California Years” comes out April 14 and when she was in town she recorded for the radio show “Sound Opinions” which is heard here on WBEZ, the NPR affiliate, Anyway, I got to be her driver! And that means I got to hang out with Jim DeRogatis & Greg Kot, who are the hosts. This is a picture of all of us on the recording day. I’m a huge fan of that show and it was a thrill to see inside the WBEZ station.

I have to say, I'm loving it here. I actually really, really liked the cold weather. Now it seems to be turning into spring. (Michael says I should expect snow up till May! But it feels very springy to me.) Every day I walk to the beach – to Lake Michigan which is just over a mile away from our house. I take my dog Arden and we go to this little park in Kennilworth – we sit on the bench and look at the water. Wait, I can’t say honestly that Arden looks at the water. Today the waves were really crashing and it was windy and I tried to see if he was looking at the water, but instead I believe he was obsessed with the absurd number of crazed squirrels that are running here and there and everywhere because it’s spring and the squirrels have gone mad.

It may not seem like it, but in Los Angeles there are, in fact, seasons. Subtle fluctuations, more rain here, more heat there. But I'm dense and I need blunt, clear seasons. And Chicago seems to fit the bill. When it’s winter, it’s doesn’t fuck around. It’s COLD. And WHITE. And ICEY. Now it's spring. Squirrels are going apeshit, delirious with the sun beating down on them. They're so high on spring they don't seem to be very wary of my dog, who has ripped out the heart of a squirrel - right before my very eyes (and screaming mouth.) This was four years ago in L.A., but still - Arden means business when he goes after a squirrel. I have to be vigilant with the leash, I cannot space out. Lives are at stake.

The lake is spectacular when it’s cold and freezing. In February, there were days of all white and the lake frozen as far as you could see. I didn't know that could happen, but it did. At this little park it often felt like I'd stepped into a painting. I would stand and stare at the still icey water and when I moved I half expected someone to yell at me - don't! - I was ruining the whole frozen scene.

I am happy to report that everything I hoped would happen by moving here has happened. Which means that my head is much less jumbled and I feel much less frantic. My parenting duties – the part I don’t so much like - shuttling Mu around for example – has been reduced by 80%. Where Mulan had to be driven 5 times a week for 7.5 miles each way in terrible traffic to get to gymnastics in Los Angeles, here it’s 2.4 miles in absolutely no traffic. And when you get there, there are so many parking spaces you want to pray in thankgiving (THERE IS NO GOD BUT THE PARKING GOD.) I keep hollering out to Mulan, (as I drive the minivan - she sits in the way, way back...) “Look, just look at all the parking spaces!!! Isn’t it just… beautiful?” I nearly wept the first time I pulled into the recreation center here. I thought I had gotten mixed up and it was some shut-down day. No, it was not. It's just... the space. The space.

Also, Mulan walks herself to school. I cannot emphasize what a change in my life this is. Did you hear me, she walks to school on her own?!? That means she gets herself out the door, and walks home too. She's her own person, and she loves it. I didn't know my dream was to be a mini-van driving housefrau with a school a block away, but here I am. I am living the dream. And I didn't even know this was my dream. I just stumbled into it.

Mulan has adjusted more quickly than I expected. She has friends, she has playdates, she’s getting good marks in school. She liked the snow when it was here, and is signed up for lots of summer classes at Gilson park right on Lake Michgan. She wants to learn how to sail. What’s not to love about this?

Well, it’s not cool. That IS true. It’s not hip. It’s very, very white – I mean Caucasian - where we live. (It’s not just the white snow, it’s the people too!) When I recently went to a benefit performance at Mulan’s school put on by the parents, I was shocked at how lilly white everyone was. And young. (I was actually asked if I were Mulan's grandmother by one teacher. !!! &*%$#@)

Y'know, I'm used to L.A., in the heart of the city, and Mulan’s old elementary where the, ahem... western european americans... were in a minority. I had gotten accustomed to that, it made me feel more “in the mix” of the world than out of it. Now I live in the suburbs. It’s not vibrant with immigrant life just outside my door – and that makes me feel sad. Even though I live not far from the village of my village. Not Larchmont village in L.A., but still... it's its own place. It has cobble stone streets. Seriously. Streets, cobbled.

Lots of days I don’t get in the car. I have a treadmill in the basement and I can work out there. I have a post office a block away and I can send DVDs off to Amazon there. The Metra (commuter train) is very near and downtown Chicago is 28 minutes away. I have time to think. And it’s glorious. I told Michael recently that I was so glad I hadn't died before now, I wouldn’t know I could be this happy.

It's become clearer, now that I’m here, that my life is focused on four partnerships.

Me and Michael.
Me and Mulan.
Me and Jill Sobule doing stage shows together.
Me and Jim Emerson. Jim has been one of my closet friends since we met when I was 17. He lives in Seattle and we are writing something together right now. It’s such a joy. Why didn’t we do this years ago? Well, we did. We wrote several things together. Jim even wrote for a bit on SNL. But Jim moved back to Seattle. Now we work by phone. It’s so enjoyable and ten times more productive than when I was writing on my own. Jim has the best blog, btw. He is the editor of Roger Ebert’s website and also has his own blog. Go to http://blogs.suntimes.com/scanners/.