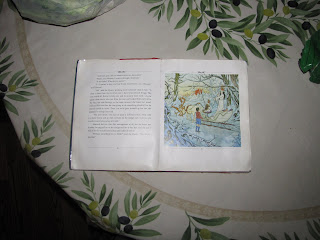 I'm in a bad mood and I should be in a good mood.

Michael, who has been gone almost two weeks to Australia, is coming home in the middle of the night. I miss him terribly. I cannot wait for him to be home. But I decided to launder our sheets and duvet cover before he returned and of course, because I am insane, I must iron them. Which takes a long time. I am crazy to iron our sheets but to me the difference between sheets that have been ironed and sheets that have not - well... there is no comparison. Even when I had a housekeeper, (and at the moment I do not have one,) I could never ask anyone to iron my sheets. I just did it myself. It's too indulgent and I admit it. I couldn't see those words come out of my mouth, "Please, I like my sheets ironed." I just could never say that to someone. It would be like saying that my underwear had to be hand washed. Which is not something I do. I'm just sayin'. There are some things that if you really want them you must do them yourself, lest you turn yourself into someone who wouldn't be yourself.

Also, I happen to love to iron. My dream job is to be an ironing lady to - well not to anyone mean and cranky and persnickety. To me, I suppose. (Ha! The irony!)

But the day got away from me. This morning it was a vast wasteland - hours of desert and luxurious time to just do what we wanted to do. But then, we had so many errands to run, the grocery store, the pet store, the bread store I like in Evanston.

And then I insisted that we watch "Gallipoli" and "The making of 'Gallipoli'" in the middle of the day. There was that.... I had ordered it on Netflix before we went to Turkey and then never watched it and I felt we had to watch it and then it meant explaining the first World War to Mulan and then I began to sob and Mulan really just wanted to read her special People Magazine issue dedicated to "iCarly." And not hear about the Turks and the ANZAC forces in the Dardanelles in the First World War. Imagine the selfishness!!!!!

In any case, the sheets were not done until late tonight. So here I am frantically ironing when I normally enjoy ironing but tonight I really, really don't feel like it all of a sudden. But I started so now I gotta finish it.

See? This is how I set myself up to be in a bad mood when I really should be in a good mood.

So, the picture of the day (above) is from a book I'm reading with Mulan - "The Lion, The Witch & The Wardrobe."

I always avoided C.S. Lewis because - well back when I was Catholic I felt he was just too Protestant (we Catholics read The Hobbit and pointedly NOT the Narnia Chronicles) and then when I lost my faith I thought Lewis was too Christian. Then I read Laura Miller's book about the Chronicles of Narnia called "The Magician's Book" and it made me really want to read C.S. Lewis. (Fantastic book btw.) So now, when Mulan takes a bath - which is a few times a week - I read a chapter to her. And the picture is from the book.

I cannot write more, I have a hot iron calling out to me!
Posted by Julia Sweeney at 9:44 PM

What lovely illustrations! My mom read The Lion, The Witch, and The Wardrobe to us for the first time on a car trip from Colorado to Michigan (sometime in the late 70's). I've tried to read it since in a mass market paperback I own, but I was spoiled by having it read to me, and gave up. I have listened to an audiobook a few times since and still love it. But man, I missed out on the pictures!!

I'm sort of embarrassed to say that I have *never* ironed my sheets and therefore don't know if I could tell the difference.

Ah, the lost art of ironing clean cotton. I remember my mom ironing. The sizzle sound of the iron, the starch, the fresh smell, the smooth warm fabric after the labor of love was accomplished.

My roommate equates ironing with expressing love. So maybe thats what you're doing, expressing your love and desire to nurture.
Nothing crazy about that. :)

I'm a fiend for ironing too. My friends have always been shocked by this as I'm not very domestic, but I find ironing relaxing in a meditative sort of way.

I like to iron my sheets & pillow cases, but I usually end up doing it only when friends come to visit so they can have crisp sheets.

As an American who recently married a Brit, I no longer have a tumble dryer so everything comes out wrinkly. Who knew the strip of fabric my daughter likes to refer to as floss could look so rumpled. If you have tips for ironing thongs, please pass them along.

I told my husband the other day that the exception to the "no appliance" for gifts rule can always be waived if we're talking about a quality iron such as the one I have shown in the link below.

I had to leave my much loved iron behind in the states and have been using his cheaper version from Asda. For someone who loves a good iron, it's just one step away from heating a chunk of metal on a wood fired stove top like my great grandmother did.

If someone asks me over here what I miss most about America, after mentioning family and friends, you might hear me moaning about my old iron.

Fingers crossed for one of these or something like it under the tree this year.

I'm curious -- how do you iron something as large as queen or king size without dragging clean sheets on the floor? Tips, please.

I have many many things I want to say after catching up with your blog, but not enough time for them all, so I'll start with this request: please, please, PLEASE--can we have the Julia Sweeney how to iron sheets how to video? Please. I don't want to watch Martha teach me how to do this. I want YOU to. Because you're funny, and normal (in a notMartha way, anyway)and--I just think if you taught me, maybe, maybe, I could do it!

have never ironed my sheets but
worked for pottery barn where we
used steamer for the bedding
displays-i always iron my duvet cover and shams, tho-any tips?
btw i recognize that church-it's either the one from Home Alone or
where i used to go to weight watchers meetings. You can get to
"the city" in less than 20 min-
we've got the best of both worlds.

I really never liked C.S. Lewis, either (same reason- too Christian) until I found this great quote from him:

"Of all tyrannies, a tyranny exercised for the good of its victims may be the most oppressive. It may be better to live under robber barons than under omnipotent moral busybodies. The robber baron's cruelty may sometimes sleep, his cupidity may at some point be satiated; but those who torment us for our own good will torment us without end, for they do so with the approval of their own conscience. Even more insidious than the moral busybodies are the true believers. They genuinely believe they are doing a good thing and, with no malice aforethought, they push their beliefs on others. In doing so, they perpetuate dogma and brainwashing that can be very difficult to overcome in a person’s later years. When begun at a young age, it fills a child’s mind with the fears that will keep the person in line for the years to come."- C.S. Lewis