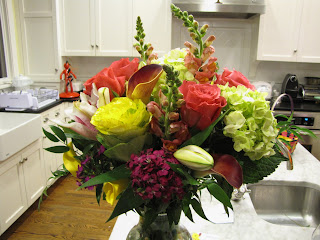 A perfect birthday, I must say.

I remember when I turned ten pretty vividly. I remember my dad saying, "Now you're a decade old." And I asked what a "decade" was and I thought, "My dad is a genius to use ten-dollar words like that!" And my dad told me and I felt it was this big accomplishment. I had reached the age of ten.

I have no memory at all of turning 20.

I remember I turned 30 at SNL when I was lying about my age and ridiculously saying I was one year younger than I was. Partly this was because I had just been hired and when they were casting they said they wanted girls under 30. So I gave myself an extra year. (BTW, they said guys could be up to age 45. Also, if you are going to lie about your age, don't make a measly year - go for it, make it make a difference! One year is just a constant math adjustment and means nothing.) Anyway, I was turning 30 but everyone thought I was 29. I remember there was cake and there was Phil Hartman and all the rest. I remember to be so glad to be out of my twenties. Even if only I knew it.

When I turned 40 I was single and i knew I was about to adopt a baby. I wanted to be somewhere exotic where I didn't know anyone. So I went to Bhutan (with a hiking group - so I guess I did kind of know people by the time my birthday rolled around...) I remember looking out the window of my hotel room at the glorious mountains.

Now, another decade has gone by. 50. I would never have guessed i would be living in Illinois. Never in a zillion years.

I spoke this morning at a cancer convention in downtown Chicago - the National Cervical Cancer Coalition. I listened to a few panel discussions. It was really interesting. A revolution has happened since I had cervical cancer. I gave my speech and it went well. Then they surprised me with a cake! They sang "Happy Birthday." I was so tickled.

Then I gave myself about four hours alone at the Art Institute. This was my gift to myself. I had lunch and a glass of wine, I read my book (City of Light by Lauren Belfer) and I wandered around that fabulous museum. I came home where Michael and Mulan had been planning a celebration. I got flowers from my dear, dear friend Donna (that's the picture) I got gifts from Mu and Michael, (Michael also gave me flowers, but alas, they didn't get photographed - maybe tomorrow...) we ate pizza and had gelato. I laughed a lot. And now I'm pooped and I suppose ready for another decade.
Posted by Julia Sweeney at 8:57 PM

What a nice day and memories. And many more to come.

Meanwhile what is 50 in "actress years"?

I really enjoyed hearing about your celebration for each decade. Bhutan must have been a pretty awesome way to celebrate. I have a friend I met last year while doing the TMB ( Tour du Mont Blanc) through the Swiss, French and Italian Alps, who went to Bhutan when she turned 50. It looked beautiful and rugged in her pictures.

I'm going back to the TMB with my sister and daughter ( husband too ) in September to welcome the beginnings of decade 6 when I turn 50.

I had to smile when I read the bit about living in Illinois, I can really identify with that given my recent marriage and move to England...it's funny where life can take us if we're willing to pack up and go.

I'd say more, but it's already tuning into a book. Sorry about that...I tend to talk too much.

It sound as if you had a perfect day. Just the right mix of internal reflection, external connection and the all important (for me) celebration with those you love.

Can also relate to not believing where you end up living. It's comforting hearing that from someone else.

I'm not sure why I did this but, my whole 29th year I told people I was 30. Somehow it was easier to say I was 30 when I wasn't, and it took the sting out of it when I actually became 30.

Congrats and Happy Birthday! You're half a century old!
:)

Site's character and a great color match .. I will recommend your site to the other platforms.Saç Ekimi