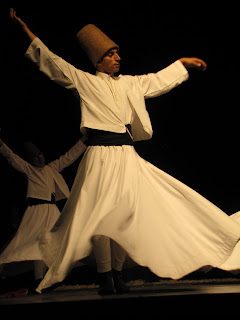 My Big Brilliant idea for my blog was to post one picture a day. A picture I took during that very day. And then add a few lines to go with it.

Now, it's day two and I'm already failing my plan!

My camera needs batteries and alas, I didn't get to a drug store today in order to buy any. ARGH. And it was such a good, photo worthy day! Mulan had a guitar class, and afterwards we went to the Chicago History Museum. (I am now intrigued by Bertha Palmer, an early Matroness of the city and have been web-surfing about her on and off today...) We had a mother-daughter lunch of hot dogs. We got her shoes and socks. We came home and made lobster ravioli for dinner. I walked Arden to the lake and back.

So, in lieu of a picture from today I am posting a picture taken in August. Michael, Mulan and I spent two weeks in Istanbul. We saw the whirling dervishes twice. I wanted to whirl. I wanted to dervish. I was really floored by Turkey. I'm currently reading a very well written and impossible to put down history by Judith Herrin called, "Byzantium."

Also, I am sad to be reading about the state of California. And I mean the state not the State. It's very bad. Teachers are on hunger strikes. 12 % unemployment. It's very worrisome.

Tonight Mulan and I watched A Charlie Brown Special - not THE Charlie Brown Christmas Special, but some later-made Christmas special called, "I Want A Dog For Christmas." Mulan picked it out at the library because she... wants a dog for Christmas. Of course, we have a dog. But she wants a "cute" dog. A "smallish" dog. A dog she can walk herself. This is not going to happen. But I did give in and rent the movie. Then we watched the making of the movie. I had no idea how precarious it was getting the Charlie Brown Christmas Special on television! The making of was about the x-mas special, not the movie that was on the DVD we rented. In any case, the part I found most interesting was how they - Charles Schultz and his producers felt so renegade and defiant because they insisted on keeping the religious end to the story. And it made me remember how we all used to feel that Christmas was not supposed to be this commercialized, secularized holiday, it was supposed to be about something SUPPOSEDLY deeper than that. And how now that's all mixed up for me. Like it was religion that highjacked this perfectly sweet holiday and made it about being a blind, superior in-your-face-Christian. Or that's the way it has seemed to me these last few years when the worst sort of people were hollering about saying "Merry Christmas" instead of "Happy Holidays." In any case.... ah... those were the days. The days of 60s liberal Christianity - the good kind. Except did that really happen? Or did it just seem that way?

Which got me to thinking about Unitarians. I should be a member of a Unitarian church. I suppose. I mean, I did this show all about how much I loved being a Catholic, how I wanted to be a member of this church and then just couldn't believe what they expected me to believe. But I don't want to be a member of anything anymore. I feel too membery in the groups I must be a member of already. And then today I was thinking about how Catholicism, like missing Spokane, and Seattle and even Los Angeles, is all - or WAS all about nostalgia. And when I think about it, it's a nostalgia for something that I'm not sure really ever existed in real life anyway. It's this romantic after-the-fact-remembrance that I sprinkled all over it and then enjoyed in this melancholy sort of way later.
Posted by Julia Sweeney at 8:49 PM

For what it's worth Julia I also want to whirl and/or dervish...

A picture that striking is worth a good week of daily pics, at least. Compliance of the Big Brilliant Plan accomplished.

You can also be a member of a Unitarian church (not even sure they call them churches). I spent a summer attending services mostly to hear the music and because it was so new to me - a little like visiting an English speaking village in Turkey or like visiting 1973 for an hour.

Not only can you be a Unitarian and an atheist (I'm one, after all), many LOVED "Letting Go of God" when I showed it to a group of them.

Where else could an atheist like me teach a sunday school class on the Bible and hear kids talk about how awful it was for God to kill all those people and animals in the Flood!

awww!! I can't believe you were in Istanbul. How crazy would it be to run into you on the street? Well, I would probably think you were not the real Julia Sweeney. What are the chances after all, right?

Yes, you have fans all over the world...

The beauty of community, people searching together for truth,doing good together, a place where children learn together and create traditions based on inclusiveness and love - this is what the Unitarian Church has meant to me.(many ex-Catholics, including myself)Loved "Letting Go of God"

In the sport's culture now, success is measured with shoe commercials and video game covers. Beautiful and fashionable young people theme of the
times! And I like sports shoes! Casual Wear!

Excellent post. It was very helpful for me.I knew little in this part before,Thank you for sharing !

Very worthwhile piece of writing, thank you for the post.