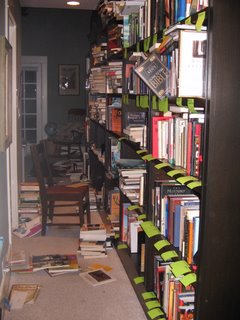 A Writing Life that (at least for today) includes no writing.

I am working on my own memoir and I am in the part where I’m at the Bible Study class. I haven’t decided exactly how to approach this part of the story yet. In any case, I was suddenly referring to several of my books on religion and the Bible and so forth and my books were so disorganized -- I haven't really organized them for over two years. I had been putting the new books I bought on top of the old books, all willy nilly. So, I couldn’t find a particular book I wanted to refer to. This caused me to stop all writing and begin the arduous process of organizing all my non-fiction. This is an enormous job. Then, I began to think about how – realistically – I wasn’t going to ever read several of the books I was organizing. The realistic part of me began to taunt the horder part of me, saying, “Seriously Sweeney, when are you going to get the time to read “Word On The Street – Debunking The Myth Of Pure Standard English” ??? Plus, I know the basics of the book since I heard McWhorter (the writer) lecture. Or I thought, “Do you really need to keep “Shrub” by Molly Ivans? I mean Bush already won the election, TWICE.” Or, do I need to keep “The Taliban” – which was written and read long before 9/11?? NO. The answer is NO. Also, why should I keep “Wired” by Bob Woodard? I mean, I read it a thousand years ago. And I saw Al Franken on TV talking about how much he hated that book and how inaccurate he felt it was. He said it was like Bob Woodard had recorded every time someone puked in high school and then written a history of high school including only those details. Not mentioning the Dostoyevsky that changed people’s lives, etc. So, why do I need to keep this book? The answer is, “I Do Not!”

So, first I organized the religion section and that led to philosophy and that led to science and then back to “current affairs” (or what I like to call the "We Are Fucked" secion) and that led me to ponder whether I was really, HONESTLY, ever going to read “The Coming Plague.” And how I ALREADY am totally expecting a plague. And this book was written ten years ago. Why do I keep it? I don’t need it! That’s what I thought. Then I had another heretical thought. And that was: “What if keeping all these books means that I am preventing someone ELSE from reading them?” And then it seemed churlish for me to keep them.

Now I have about three hundred books in the corner of the hallway, ready to be taken to the local library. I have all the religion I’m keeping separated by topic. I have the science separated by author and topic. The places of honor are: Daniel Dennet, Michael Shermer, Richard Dawkins, Stephen Jay Gould, Diane Ackerman, Susan Blackmore, Steven Pinker. Oh Joy! Organization! It’s been so long!!1 The dust behind the books makes me sneeze and cough. Magazines from two – three years ago are wedged behind the books, a cradle of dust bunnies resting inside them.

It’s amazing how, in even a few years, the internet has changed my attitude about books in general. Encyclopedia type books are really no longer necessary – dictionaries, a lot of history seems easily accessible if I tried to find it.

I am worried this project is going to eat up my day tomorrow and it just, simply, cannot. But I am burnt out.

Today I went to NBC, to a pilot reading for the executives. Charles Durning was also in the pilot reading. We sat next to each other. I actually met him yesterday at the rehearsal. It was really a thrill to meet him. He told me today, as we waited to read, about growing up in New York, in Hell’s Kitchen. He said you had to join a gang or you were done for. He said he chose a bad gang – the Westerners – I think he called it. He said they started to hurt people, seriously hurt people – robbing them. He said they even started to kill people. He said he got scared. You couldn’t leave the gang or you would be dead. So he joined the army. That was the only way he could figure to get out of the gang.

What a thrill, to get to talk to Charles Durning.

Today Mulan said two adorable things. Stop reading if you can’t stomach this kind of stuff, I totally get it, if it’s nauseating. She said, “You are my favorite adult.” And I said “Adult?” And she said, “Well, you are my favorite Mom.” And I said, “But I’m the only Mom you have.” And she said, “But I know a lot of moms, and I think you’re the best.” Ha. I love how she’s done a survey and I get top marks. The other thing she said while we were watching “Good Eats” on TV tonight (we watched a rerun about “oats” while we ate dinner – I know, it’s bad to eat and watch TV, but we did and so…there…) and Mulan wanted me to rub her back. And I said “Where do you want me to rub?” And she said, “Along my vine.” And I said, “Your vine?” And she gestured towards her spine. And I said, “Your spine?” And she said, “No, isn’t it called a vine?” And then we talked about how similar spines and vines were. And I just – oh jeez. I love having a kid. Stuff like that. A vine. Yes – it’s a vine! I love that to Mulan, she’s built just like a plant.

My friend Phil Plaite is writing a book about the moon. I also talked to him today about this. I am all over the moon. I just watched a “Naked Science” all about the moon. I had no idea how important the moon was to our existence. Just no idea. DAMN. I lost half my life to ignorance! I didn’t even care about stuff like the moon before I was forty. I didn’t understand how the moon was formed, nothing. It’s embarrassing. Anyway, I reread in “Rare Earth” about how important the moon was. I even went outside tonight and looked at the nearly full moon. I practically howled in delight and appreciation.

Oh, I found, to my embarrassment, that I have bought some books twice. Like, "A Darwinian Left" by Peter Singer. Or "Moral Animal" by Robert Wright. What is wrong with me? How could I forget that I bought those books?

Next weekend I will be heading to the TAM conference in Las Vegas. I am SO excited to go. Mulan and the nanny, Frances, are coming too. A whole entourage.

Tomorrow I am making oatmeal the way I learned how on "Good Eats." Brown the steel cut oats in a little butter before cooking them. Add the salt after it's cooked. I'm excited to see if there is a difference.
Posted by Julia Sweeney at 9:44 PM

My favorite kid thing spoken is from my grandaughter. When she was around 4 she said to me, with finger perched on chin, "I've got mydeah!" I use that always, it is so much more descriptive than I've got an idea."

Julia, about two years ago I did my Great Unload (books) during a summer garage sale. Sold them buy the box full. Literature, Philosophy, Religion, Mythology ect. I felt my learning was over the head soaks up alot but retains little. I would pick up a book open it and read a few lines, and think why am I rereading this. Am I unsure of what I belive that I need a little fix now and then. And I heard some where that if person could truly read a book deeply and hold on to it, that they may only need three of the great books to obtain inward light of there own reason. Well I held on to the Never Sell books and now just borrow them from the book store. Simplify, was something that rang true. I mean in the world of things how complicated do we need to make it. You know Beauty, Justice and Truth already. It was there in you DNA, but malice, hubris, and jealousy has ways of clouding ones vision. Well, needless to say my great learning has just begun, that is to unlearn and try to see true with a pure heart. I do love books, hell I've worked in a bookstore for over 12 years. And it was books that got me to this point of departure. There is a Body Wisdom and all the books in the world can not teach it all they can do is point. So I think the great unload was good for me. "There is a crack in everything, that is how the light gets in." thank you for listening.

I love the picture of the bookshelf. I wish I had that much room for books.

And Jared Diamond is talking at the Skeptics on Sunday. Yay.

I can feel your pain on having too many books. I have a very difficult time getting rid of any that I have, and my husband is constantly hounding me to do so. I have found the best way to do it is to donate them to the library. I also have a habit if marking in books if something is profound, amusing or somehow strikes a nerve in me and I have found it interesting to look for "my" books at the library to see if others have checked them out and added their own thoughts or marks as well. It makes for a kind of anonymous bond. Anyway, I truly have enjoyed reading your blog. I just ran across it...thanks for sharing a little bit of yourself with all of us.
Peace,
Nelita