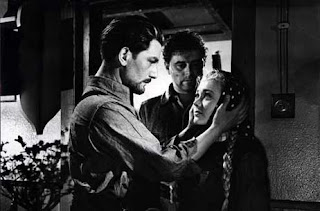 I like how you do these posts where you talk about what you watch and what you read, and just examine them. I think what I appreciate the most is that it is more personal than a review, and you find some way to fully put yourself and your knowledge into your writing seamlessly.

Welcome back! You're gradually working your way back to your goal of a first-of-the-month posting. I note this with gratitude, rather than with the tut-tut of a schoolmarm.

You seem to be losing books left and right. While I respect your self-imposed system of not allowing yourself outside reading until you've devoted an hour to your current book, I have a suggested tweak that may help. Apply the rule only AT HOME--take a magazine or two with you when you go out, rather than a book. Better to lose a mag than a book, and magazines are also less cumbersome than books.

Another variation that I find useful: if I have two books going, one must be fast-paced genre fiction. Switching from a dense non-fiction book to a fun mystery helps me balance my brain, while still reading books rather than wasting (so much) time surfing the web.

I so enjoy your blog.. thankyou thankyou! It's interesting that you mentioned Matt LeBlanc starring in Episodes - for those of us not from the US, we think of it as a Stephen Mangan/Tamsin Greig show, with the guy from Friends in as well.. haha! Now.. if you liked it, I am almost climbing into my laptop with enthusiasm to say you should watch Green Wing. Both those English actors star in it, along with an incredibly funny and talented cast. It is unlike any show I've seen before.. breaks a lot of rules in the most delicious way possible. I'd love to know what you think of it :)

Julia,
I rarely get 5 minutes to myself let alone enough time to watch a movie but reading your reviews makes me yearn for a movie marathon day on the sofa, with tea and snacks to graze on all day.

Love your one woman shows,love that you let us into such meaningful bits of your life, love reading you and so looking forward to your book.
xx

The 49th Parallel is an electronic journal which aims to promote interdisciplinary study of the North American continent in the nineteenth and twentieth centuries.

While I respect your self-imposed system of not allowing yourself outside reading until you've devoted an hour to your current book, I have a suggested tweak that may help.

I wonder if you've seen this? It seems like a sketch-comedy spoof, but sadly, it is REAL.

Was VJ this 'far out' in your SNL days?

Just so you know, I think about you and your mother and heaven in an instant, every time I Comet my bath tub.

I really enjoyed reading about the movies you have watched. I hadn't even heard of "The Conspirator" until now. I have to put it on a "must watch" list.

Hi! Do you know in the event that they make any plugins to help with SEO? I am trying to get my weblog to rank for some targeted keywords but I am not seeing excellent success. In case you know of any share. Kudos!

Awesome resource. Thank you for sharing this with the rest of us.I would like to read you another informative post very soon.

It is really nice to hear your discussion on specific topic here. I too agree with your points here. keep posting good blogs. Thanks.

Thank you for sharing this with the rest of us.I would like to read you another informative post very soon.

Informative and interesting which we share with you so i think so it is very useful and knowledgeable. I would like to thank you for the efforts. www.iessaywriter.com
I am tiring the same best work from me in the future as well. I'll use this information to provide research paper help.