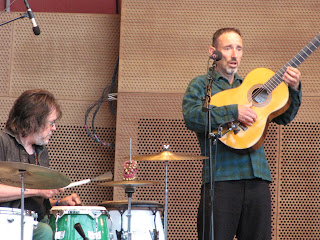 Jonathan Richman with his drummer Tommy Larkins at the Pritzker Pavilion at Millennium Park in downtown Chicago on June 4, 2012

I met Jonathan when I was on SNL and the cast was asked to participate in writing an entire issue of Spin Magazine.  I was told I could interview any musician I wanted, anyone at all.  I said, "Johnathan Richman!"  The editors told me he didn't do interviews, hadn't for years.

Oh. I was so sad.  I love his music so much.  It made me laugh.  His music made me get emotional.  It was awkward and weird. And it was melodic and complicated.  I loved his music soooo much.  How could he say no?  They had to beg him, just absolutely beg him!

In the end, I was able to interview him and we immediately became very good friends.  We hung out constantly and even appeared on Late Night With Conan O'Brien a couple of times singing songs together that Jonathan wrote about my life.  I traveled with him and sometimes did shows with him.

(If you don't know Jonathan, I suggest the following songs:  "Roadrunner" and "Pablo Picasso" are probably his most famous songs from when his band was called The Modern Lovers.  My personal favorites are "That Summer Feeling" and "To Hide a Little Thought" and "When I Dance" and "Abdul and Cleopatra" and "I Was Dancing in the Lesbian Bar" and "Vampire Girl" and I have to stop because I could go on and on.  (Also there's a pretty good cover album called, "If I Were A Richman," my favorite covers on that are "Government Center" by the Underhills, and "The Lonely Financial Zone" by Kowtow Popof)

Oh, yes, another great song that I always think of whenever anyone refers to me as a wife is "When I Say Wife" Wife sounds like your mortgage and wife sounds like laundry....

We have fallen out of touch in the last few years.  Even though Jonathan tours around a lot.  Partly this is because he doesn't have a cell phone or a computer.   This makes things difficult.

In any case, this time we were able to connect and he and Tommy played a great show downtown and afterwards they crashed here at our house before driving on to Detroit.

It was a highlight of the month.

So, thank you for all the lovely comments to the blog entry I wrote about my brother Bill dying.  I am still processing everything.  Even though we expected this, somehow his death is a big surprise and it has effected me much more than I thought it would.  I am really sad and discombobulated by it.  The world is off kilter, the earth is not firm beneath my feet.   It's like a physical wound where I think I'm pretty much over it and then I'm suddenly overcome with pain and grief.  I almost feel as if I'm limping.  Like when I told Jill Sobule about it.  I suddenly remembered that when Jill and I did a show in Spokane together last year, we'd had lunch with Bill.   Bill had later told me he loved Jill - just loved her, had a crush on her even, and he wanted all her music.  He was really so enthusiastic about our show.  He loved discovering her music.

Telling Jill about Bill made me remember that.  Then I was a mess for an hour or so.

I've felt really skittish and I'm finding it hard to concentrate.  I tried to go to a lot of yoga, and its helped.  But the classes seem fifteen hours long, just excruciatingly long.  My mind is hopping from thing to thing.  I'm doing a short mindfulness meditation session regularly, and that is helping.  In fact, I read a wonderful Mindfulness book this month.

On that note, let's go on to books:

I read the following books in June, 2012

1.) "The Outsourced Self: Intimate Life in Market Times"by Arlie Russell Hochschild
2.) "The American Way of Eating: Undercover at Walmart, Applebees, Farm Fields and the Dinner Table" by Tracie McMillan
3.)  "Fully Present: The Science, Art & Practice of Mindfulness" by Susan Smalley and Diane Winston
4.) "The Glorious Art of Peace: From the Illiad to Iraq" by John Gittings

I really like Arlie Russell Hochschild.  I recently read "The Second Shift" and was astonished at it's clarity and even-handedness and the raw truth it revealed about the politics of home management in homes with two working parents.  I was eager to read this new book of hers.  I really enjoyed it.  She makes no big negative judgements about how we are outsourcing some of our most intimate jobs - care for our elderly parents, care for our children, and even gestating our children.  I laughed hardest at the Catholic priests in India who say masses for Americans who've paid for a mass to be said in some person's honor (in the Catholic culture, this is a common practice when someone dies.)  There aren't enough American priests to do it, and the Indian priests need the money and it goes farther there.  So they say masses all day long for people in the U.S.  I thought of this again as my mother has told me about all the masses that have been paid for by people sending her condolence cards about my brother.  Now I know that someone in India is likely to be saying a mass for my brother Bill.

Tracie McMillan wrote a very good book about food production in the U.S.  I liked the parts best when she goes and works as a peach picker and a garlic cutter in California.

"Fully Present" the mindfulness book is probably the best book I've read about mindfulness so far - and let me tell you this is a big compliment cause I've read an enormous number of them. Very scientific and fact based.  Really useful information and ideas for a lot of different ways to meditate.

I've read only half of "The Glorious Art of Peace." ADORE IT.  I was a European History major in college and I'm astonished at how history is taught, even at the university level, very war-centricly.   When you view history through the lens of peace, it looks different.  Of course defining peace is another thing.  But still.  I'm looking forward to the rest of this book.

I realize I read all non-fiction this month.  I hate that.  I just find certain types of non-fiction books completely irresistible.

Here are the movies I watched in June.

For me, it was a very light movie month.

I did like "Moonrise Kingdom" and I think Wes Anderson is a talented filmmaker who I am very glad is able to make movies, and I hope he continues to be able to make movies.  But...  Well, I just don't get emotionally involved in his characters in the way that I wished I did.  I liked the kids, especially the boy, but... I wish - I want to like his films more than I end up liking them.  I guess that's it.  Even though I am decidedly on the side of liking them.  But it feels cerebral, and not emotional.  Hmmm....

I found out my brother died and within five hours I was at the Evanston Cinemas watching "Your Sister's Sister" which starts with a brother's memorial.  I almost left the theater - I didn't know that that was part of the film.  But I was glad I stayed. I'm a growing fan of Lynn Shelton.  It was the exact right movie to see at the exact right moment. I cried and cried. It was about sisterness and brotherness.  And it was filmed in my neck of the woods, the Pacific Northwest.

I forgot how great "The Bitter Tea" was - I hadn't seen it since college.

On SAturday night I went to the Gene Siskel theater and saw "Paul Williams: Still Alive."  It's a very good film, and really powerful for me to see considering my last month.  Paul Williams is sober, but was an alcholic for many years.  Steve Kessler, who is a friend of mine, directed a documentary about him.  Both of them were there on Saturday night.  In fact, I'll post a picture of us with my friend Gino Salomone, even though I'm so shiney I can't believe I'm going to post this picture (it's been very hot in Chicago, I don't know why everyone wasn't all sweaty!)

Paul Williams is such an interesting mix of personality and truly a survivor.  The film is not what you expect.   It's mostly about a relationship, the relationship between Steve Kessler and Paul Williams.  But it's also a harrowing story of success in Hollywood, and about a man who was able to overcome his destructive behavior to lead a happy productive life.  Paul Williams is such a unique person too - a wonderful songwriter - his songs are on the order of Burt Bacharach in brilliance and certainly competes in the pop culture marketplace, maybe even ahead of Burt - but he's got this showman inside of him that needs an audience and wants to be in front of the stage.   He succeeded against all odds and crashed, and then survived in a hard won and beautiful way.  I highly recommend this film to you. 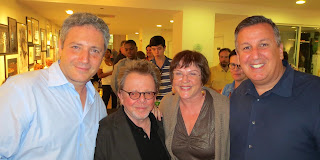